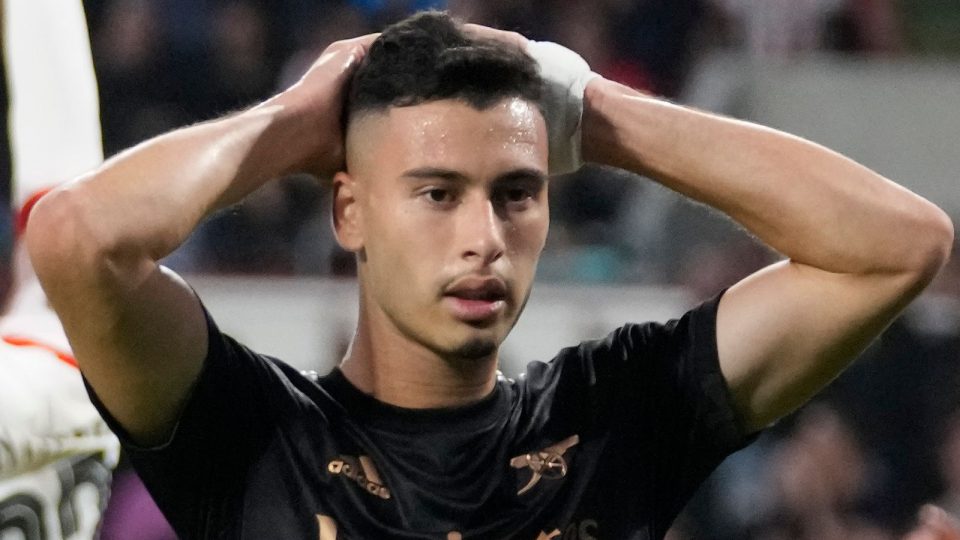 Plus: Nayef Aguerd can give West Ham manager David Moyes something to ponder after debut in Europa Conference League win; Arsenal was beaten 2-0 by PSV in the Europa League as Man Utd beat Sheriff Tiraspol 3-0; 18-year-old Alejandro Garnacho shone on his full debut for Man Utd

Football fans are never blessed with bundles of optimism, and Arsenal fans will certainly be nervous after watching their side be roundly beaten by PSV on Thursday.

And much like Mikel Arteta, Ruud van Nistelrooy is proving to be as talented in management as he was on the pitch.

But you would have been forgiven for thinking Arsenal were already assured of top spot in Group A such was their lacklustre showing in the Netherlands. The Gunners are now in danger of finishing second in the group, sending them into a two-legged play-off, with Barcelona and six-time Europa League winners Sevilla already waiting.

Mistakes were made from the off. For much of the first half, Arsenal completely rode their luck, relying on some last-ditch defending, saves from the goalkeeper or PSV’s apparent inability to stay onside to keep things level.

They always looked like conceding – which they eventually did – with Mikel Arteta having made five changes from the weekend. Gradually, those that were switched out from the start began to be introduced but did not have a huge effect on the outcome either.

After drawing against Southampton at the weekend, some will now be wondering if this is the start of an Arsenal slide after a storming start to the season. There looked to be some major disconnects in the team against PSV and ones that must be ironed out quickly.

There have been some questions marks over squad depth too. However, the starting XI on Thursday had more than enough talent to at least make the game competitive. For much of the tie, Arsenal was simply second best.

But Sunday’s match against Premier League bottom side Nottingham Forest offers the perfect opportunity to get their results back on track. Yes, Steve Cooper’s side did beat Liverpool last weekend – which will sure to be in the back of their minds – but Arsenal will be confident of getting a result.

It will set them up perfectly heading into a now-crucial match against Zurich on Thursday, which they must win to top the group and avoid adding two more tough fixtures to an already congested fixture list.

be Arsenal’s biggest test of Group A. The Dutch side are unbeaten in seven at the Philips Stadion and have only lost once there – to Rangers in their Champions League qualifier – all season.

The talent they have in their squad, while below par in London last week, is quite incredible. On Thursday, Cody Gakpo and Xavi Simons looked world class. Luuk de Jong made an inspired second-half cameo, reminding everyone of his sheer class, to just pick out a few.

Ghana can beat any team in the World – Otto Addo