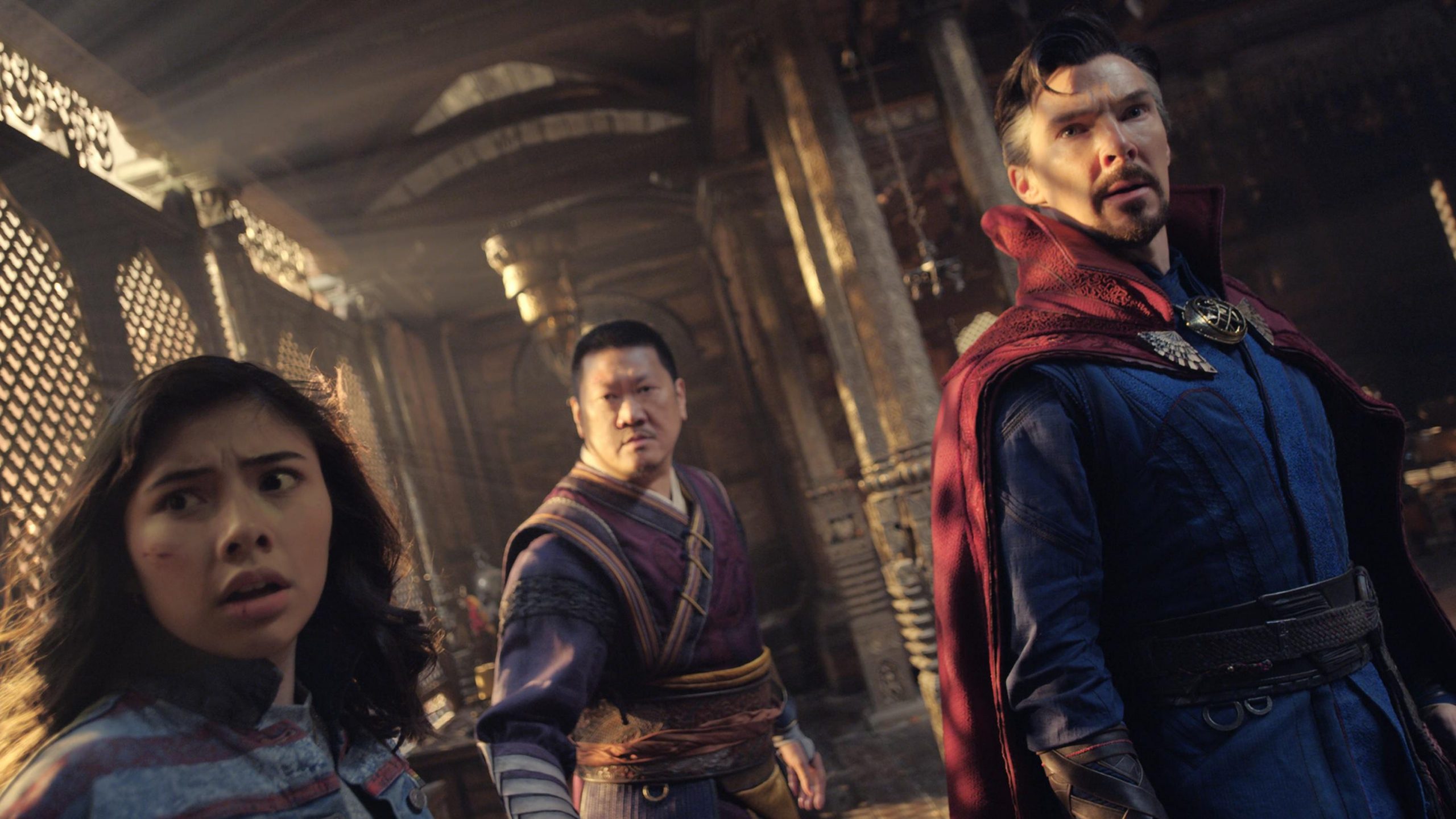 Doctor Strange 2 : Walt Disney is reporting that Marvel’s Doctor Strange in the Multiverse of Madness earned another $8.9 million in North America on Wednesday, down 29% from its $12.6 million Tuesday. That’s a drop closer to Iron Man 3 (-28%) and Avengers: Age of Ultron (-28%) than the 34% Wednesday/day six drop for Captain America: Civil War. To be fair, overall multipliers among those summer kick-off movies will only mean the difference between Doctor Strange 2 earning closer to $425 million domestic versus earning closer to $450 million. I’m expecting a second weekend drop between 58% (Iron Man 3) and 61% (Spider-Man 3), which would be an over/under $75 million gross and a ten-day total of around $305 million domestic. Presuming a similar hold overseas as well as a similar 41/59 domestic/overseas split, the $200 million MCU sequel could end Sunday night with around $745 million global.

That will put it past F9 ($721 million, including $205 million in China) and behind The Batman ($760 million, including $370 million domestic). It’s certain to become the second-biggest Hollywood grosser of the Covid era, behind Spider-Man: No Way Home ($1.89 billion). I’m presuming it’ll at least top China’s The Battle at Lake Changjin ($905 million, with most of that from China) to be the second biggest Covid-era release from anywhere, but that’s not yet a foregone conclusion. The film has earned $222.6 million domestic (it’ll pass Shang-Chi‘s $225 million domestic total today) and $309.8 million overseas (passing Tenet’s $305 million overseas cume, which was incredibly impressive in summer 2020) for a $532.4 million global cume. It’s Walt Disney’s first $300 million-plus overseas grosser and their first $450 million-plus global earner since Star Wars: The Rise of Skywalker ($1.073 billion) in late 2019.

With Disney’s earning calls yesterday showed a decent 7.9 million bump in Disney+ subscriptions (to 137 million globally) but with much of that coming from India where Disney earns at most $20 per year (and at least $0.63 per month) from a given subscriber household. If domestic subscriptions have plateaued, and again this is partially due to a 1.5-year moment when families couldn’t leave the house, and if the many/most potential subscriptions are coming from overseas territories, that’s a different scenario that ever-growing subscriptions from consumers plunking down $8 a month. Presuming every single new subscriber came from India and opted for the most expensive option, which they did not but please humor me, that’s $153 million in revenue. Marvel’s Doctor Strange in the Multiverse of Madness will likely earn Disney around $500-$700 million in revenue in global theatrical alone.

Had Turning Red earned even Sing 2 numbers ($406 million) worldwide, that’d be around $200-$250 million in revenue/rentals just from theatrical. By making it mostly a Disney+ exclusive, well, they got almost no theatrical revenue from its $17.7 million worldwide gross, while the acclaimed Pixar flick earned domestic viewership lower (while still objectively “pretty big”) than Walt Disney’s Encanto. That film got a halfhearted 31-day theatrical window, and $250 million worldwide still sends back more money to Disney than $17.7 million. Encanto exploding on Disney+ over Christmas week was seen as a sign that Bob Chapek was right to position it as a mostly streaming-specific product. However, maybe it was just a super-enjoyable musical with songs that kids wanted to watch on repeat. There’s a reason why Moana still usually pops up among the top ten movies on any given Nielsen ratings chart.

As we’ve seen with The Batman, Spider-Man: No Way Home, Sing 2 and even Free Guy, a robust theatrical campaign leading to a successful theatrical run makes a film like Doctor Strange 2 more valuable in the streaming afterlife, not less. The notion that Disney would mostly call it quits on a revenue stream that earned them $12 billion in 2019 (and likely would have earned them around $7 billion in 2020 in a non-Covid world) is beyond absurd. Yet that seems to be what is happening save for Kevin Fiege’s MCU flicks and exceptions like James Cameron’s Avatar. The biggest danger to movie theaters isn’t Covid, but studios refusing to provide theaters with a steady stream of small-to-mid studio programmers to keep them operating in between the tentpoles. And Disney has even been withholding a few of those tentpoles too.

There are barely a dozen “big” theatrical releases this summer, and to be fair Disney is providing three of the bigger ones (Doctor Strange 2, Lightyear and Thor: Love & Thunder) while Universal offers the other big three (Jurassic World: Dominion, Minions: The Rise of Gru and Jordan Peele’s likely breakout Nope) alongside Paramount’s Top Gun: Maverick, Sony’s Bullet Train and Warner Bros.’ Elvis. Disney isn’t the only “problem studio” in this regard. However, fair or not, there is something grim about how Disney spent six years training audiences to view their big brands (MCU, Lucasfilm, WDA, Pixar, etc.) as the only automatically theater-worthy events for sporadic moviegoers (while Netflix convinced us that everything else only merited an at-home streaming view) only to seemingly take their ball and go home at the first sign of illusionary or temporary Netflix-style stock increases.

How to Excel in a Competency-Based Interview