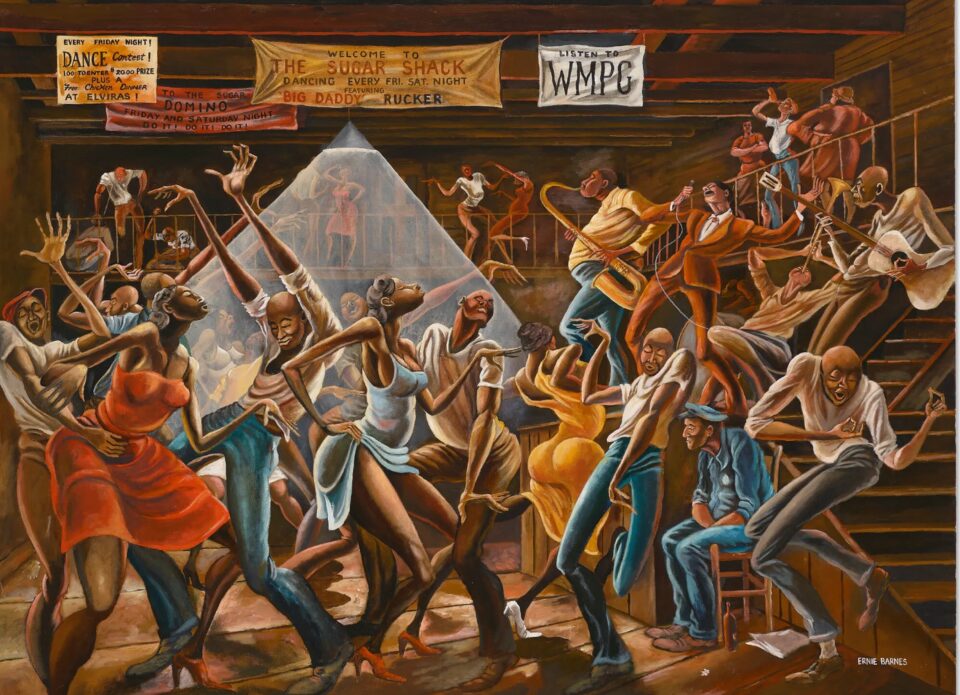 The famous 1976 painting by ex-NFL player Ernie Barnes, The Sugar Shack, known to fans of the popular sitcom Good Times during its opening credits, was sold in a New York auction on Thursday for a massive $15.3 million.

The pop-culture piece also starred as Marvin Gaye’s cover art to his 1976 album I Want You. Per Christie’s auction house, the auction set a record for Barnes’ collection at 27 times higher than his prior works, and 76 times higher than the original estimate of $200,000. The iconic image was won by Houston-based energy trader Bill Perkins, 53, after over 10 minutes of bidding and 22 contending bidders.

“I STOLE IT — I WOULD HAVE PAID A LOT MORE,” PERKINS SAID TO THE NEW YORK TIMES AFTER THE AUCTION. “FOR CERTAIN SEGMENTS OF AMERICA, IT’S MORE FAMOUS THAN THE MONA LISA.”

He felt like for a painting of this caliber, he did not want to risk being outbidded over the phone, so he flew to New York specifically for the sale.

“What if Oprah shows up? What if P. Diddy shows up?” he recalled. “I’m not going to be able to buy this piece.”

In it, The Sugar Shack catapults viewers into a joyous Black club where partygoers dance passionately to an ensemble composed of a lead singer, sax player, trumpeter, guitarist, and drummer. It is a scene larger-than-life, the limbs of the partygoers fully outstretched and exaggerated to portray the groove and euphoric buzz of the night. A signature of Barnes’ works, most of everyone dancing have their eyes closed, likely to represent the artists’ mantra that “we are blind to each other’s humanity.”

Per the outlet, Barnes drew inspiration for the enigmatic image from his childhood memories of North Carolina, and painted in a style today known as Black Romantic.

“You never saw paintings of Black people by Black artists,” Perkins said. “This introduced not just me but all of America to Barnes’ work. It’s the only artwork that has ever done that. And these were firsts. So this is never going to happen again. Ever. The cultural importance of this piece is just crazy.

“I either wanted it, or to make the other people pay,” the winning bidder exclaimed with glee.

#AuctionUpdate Ernie Barnes ‘The Sugar Shack sets an auction record for the artist this evening, 27x the previous record set by the artist. After over 10 minutes of bidding by up to 22 bidders, the piece realized $15.275 million. pic.twitter.com/GQOH03vF0a

Cardi B Has Some Motherhood Advice for Pregnant Rihanna

The Leadership ‘Secret’ That Smart Leaders Have Known for a Century