From Homeless Single Mom: This entrepreneur struggled to get her business off the ground as a single parent to two small children, but she refused to give up.

When I was two months pregnant with my second child, I started a new business selling promotional products to businesses in my city. I already owned a consulting business at the time and had a lot of international clients, but it required a week of travel each month. The travel had been challenging as a single mom with my young daughter, but I knew it would be impossible to manage with two children.

My plan was to build up the new business with local clients and create a life that didn’t require travel and made a bit more sense with two young kids. The new business was promising, but unfortunately it didn’t grow quickly enough to create the income we needed by the time my son arrived.

As an only parent, the pressure was on to keep the money coming in — no matter what else was going on. A small matter, like creating a human, was not going to slow me down. I was sending out quotes to clients and working on orders right up until midnight the night before my son’s arrival. And I was on my computer less than 48 hours later, from my hospital bed, chasing up orders and sending emails.

Over the next few weeks, there was still far less money than there were bills to pay, so I started selling anything we had of value: furniture, clothes and eventually most of my jewelry.

When he was four weeks old, I started going on interviews for a day job to help cover the bills. I remember trying to fit my recently pregnant body into work clothes with varying degrees of success. In every interview, I was very careful not to mention that I was a single mother to a a six-year-old and a newborn. No potential employer was going to look at that as a promising combination.

“With a six-year-old and three-month-old in tow, we were homeless”

When my son was six weeks old, I started a full-time job with the radio station in the next town. When he was eight weeks old, I dropped him off for his first full day of daycare. And then I sat in the car and sobbed. I will never forget the agony of leaving that tiny little boy in that loud room, full of strangers, and feeling so helpless and hopeless.

Despite the day job, and the business still growing, it wasn’t enough. When he was three months old, I sold our house to pay off the credit-card debt. So, with a six-year-old and three-month-old in tow, we were homeless.

I honestly don’t remember most of my son’s first year of life, and it still makes me incredibly sad. When I was working, he was with other people, and when I was with him, I was so incredibly tired that the memory of it is just gone. But that’s when something switched inside me.

I had always been a hard worker, often having two or three jobs at a time, but real business success seemed to elude me. But now I couldn’t even keep a roof over my kids’ heads. I would do anything for these small humans, but I had failed them miserably.

I was going to fix this — and never let it happen again.

“I balanced midnight feedings with emails to clients”

I had always had a small buffer of space between where I was and the worst-case scenario. But that small buffer was no longer enough, and my current situation was unacceptable. Going forward, I needed that buffer zone to be a mile deep so that next time, if I fell, I would have so much space between where I was and this place, that I could fall forever, and still never reach the bottom.

So, out of options and out of time, we set up camp in my parents’ spare room, and I worked days at the radio station and nights on my business. I balanced midnight feedings with emails to clients and tried desperately to stay awake on the drive to school each morning.

That’s when I built my first vision board. I didn’t know what I was doing; I was just trying to make myself feel better — to make myself believe that there was something better coming for my family. It wasn’t very ambitious. It had pictures of a simple home, a garden to grow veggies, a kitchen to cook with my kids, a vacation to somewhere warm and the most outrageous thing on it — private school for my daughter. 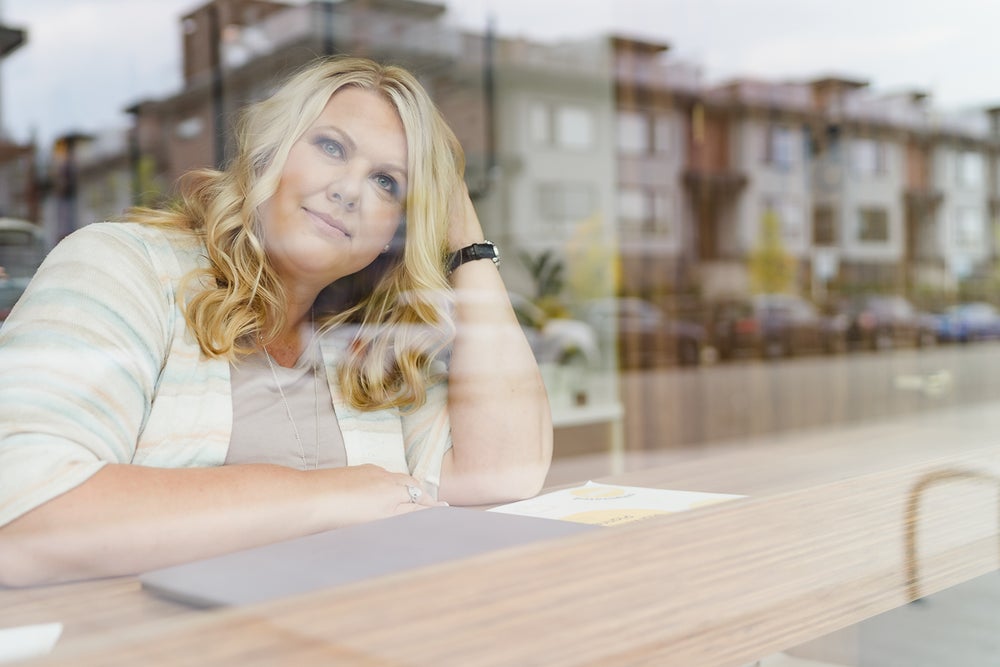 “When I looked at my vision board, I realized I had achieved almost all of the items on it”

I spent every lunch hour and break in my car, in the radio station parking lot, making client calls to build my business. I hustled and sold and worked, and after six months, the business had grown, and we moved into a place of our own. Sure, it wasn’t our house, it was a rental, and yes, it was definitely in the worst part of town, but it was a step forward, out of the hole we were in, toward the light, and it was a home for my kids.

I had a kitchen where we could cook together, and a garden, and that fall I enrolled my daughter in the best private school in the city. When I looked at my vision board, I realized I had achieved almost all of the items on it. My next board was more ambitious. It pictured a larger, newer home, a new car, a vacation to Hawaii, and the goal of reaching the million-dollar mark with my promo business.

Just over two years later, we moved into that new house, which looked eerily similar to the one I had on my vision board, bought a new car, took my parents to Hawaii for their 70th birthdays, and I reached the $1 million mark in my business.

So, what changed? I have always been one of the hardest workers in the room. I’m smart and reasonably personable, for an introvert. Why did we end up homeless, and then what made it possible to not only recover, but also to find success?

The key wasn’t in the hard work. Some of the hardest working people I know struggle their entire lives, with little success. I believe the key was a mindset shift as to what was acceptable. What was comfortable. What was achievable.

Honestly, work-life balance is a mythical creature I have heard exists, but have never seen. But success is no longer just an option or something to strive for. Success is required because I refuse to fail these kids again. I have reset in my mind what is acceptable, what is possible, and that new buffer zone is huge.

Why am I telling you this? It’s not to say, “Hey look at me, look what I have done.” I want to show you that you can do this. You can do even better than this. I dare say few people had less time than I had when my son was born, and I had two kids, no home, and two jobs. But I did it. You can absolutely do it too.

And that’s what I want for every woman on earth that wants it. Every woman should be able to create her own success and security for her family. When you are working for someone else, your success is limited by that person’s structure. You can be successful, but only to the extent that his or her structure allows. You trade in your potential for a feeling of security.

Entrepreneurship comes with risk, but I believe it comes with even greater reward. It’s time to imagine what you truly desire for your life, take the leap and reset your vision for massive success.

The Most Important First Step When Starting a Business

The 6 Scary Truths About Becoming an Entrepreneur

Running a Business for 10 years, these are 10 lessons Learnt