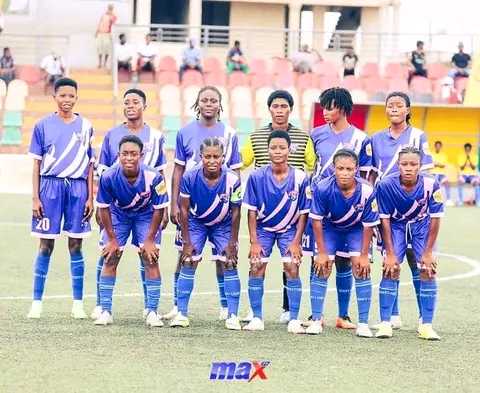 Berry ladies Fc wins their first game for the 2022/23 Malta Guinness Women Premier league by 2-0 against Soccer Intellectual at the Home, Madina Astro turf this Saturday.

The home team had a brilliant recovery from the 1-0 defeat against Hasacaas Ladies Fc in their previous game as they made sure most of their mistakes in their first match were not repeated.

The first half ended on a goalless draw with both teams trying to get their shots on target and but none gave both teams the lead in the first half. It can be said that there was a 50 percent ball possession for both teams after the first 45 minutes.

The game saw a change in the 47th minute with the first goal from Berry ladies Fc striker Jacqueline Amponsah Ampomaa as the goalkeeper had no control than to watch the ball find it way to the net.

Ginikah Ikeh scores the last goal for the home team in the 87th minute with a swift possession of the ball on the chest, skillfully kicking the ball into the net. Goal keeper for Soccer Intellectual Boamah Rita comes out of the penalty box to Ginikah Ikeh, hoping to Kick the ball out but rather leaves a her goal post empty allowing the home team gain two goals in their favour.

Though Soccer Intellectual had the opportunity to gain a goal or two in their favor, Goalkeeper for Berry ladies Football Club, Abigail Tawiah Mensah made this impossible with her great saves.

Photographer Elroy Salam on evoking emotions through the lens