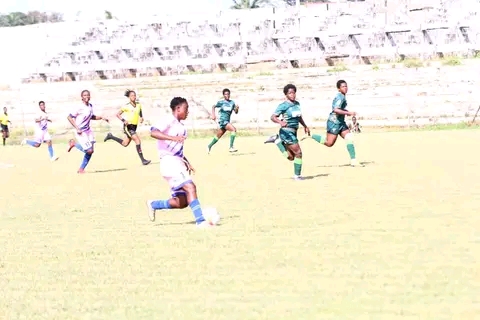 Berry Ladies Football Club lost to Hasacaas ladies fc by a goal, with Doreen Copson’s late strike in the 79th minute giving the home team a win on their first game in the Ghana women premier league at Gyandu Park yesterday .

The first half ended in a goalless draw with Berry ladies fc clearly showing dominance in possession, tactical play with most shots on target, defensive output which serve as a bridge to the opponent and displayed skillful experience in handling the ball.

The away team consistently resisted the constant threat Of Hasacaas ladies fc striker Doris Boaduwaa, as her inability to score left her frustrated.

Victoria Salifu, Ginikah Ikeh maintain the push for a goal as Hasacaas ladies goal keeper nearly conceded an own goal with the consistent pressure coming in from the away team in the first half.

Referee Barikisu Salifu Officiated the match with no biases and insured discipline throughout the game . This gave room for no complaints from both teams.

The Referee whistle a Foul against Berry ladies due to a push of the ball on the right side of the Hasacaas ladies player Comfort Owuso close to the penalty box resulting in free kick as the home team conceive a goal . The match which ended on a 1- 0 had many opinions form supporters.

Speaking with some supporters, they were of the view that both teams were very strong that is why it took a long time to concede a goal. Berry ladies were very strong and pressed hard which made it difficult to dispossess the ball when in control. Hasacaas with their experience must not look down on the away team at they came fully prepared.

Others were also of the view that though they came in support of the home team, the name Berry ladies Fc will forever be in their mind especially the captain of the away side Cynthia Boakye-Yiadom . They admired her swiftness and self confidence .

Berry ladies fc showed dominance in their first game hence leave no room for doubt as their next match in their home can guarantee a win. They are set to play with Soccer Intellectual next week Saturday at their home at Madina Astro turf .

How to Write A Business Plan [A Comprehensive Guide]