Ibrahim Sangare is believed to have a €35m release clause in his PSV contract, which has three years remaining; source close to the midfielder says he has his heart set on a move to England and is convinced he will be playing in the Premier League next season

Sangare is believed to have a €35m (£29.9m) release clause in his contract and has also been linked in the Dutch media with Liverpool and Newcastle.

A source close to the 24-year-old said the player has his heart set on moving to England and is convinced he will be a Premier League player next season.

Sangare joined PSV from Toulouse in September 2020 and has three years remaining on his deal with the Eredivisie club.

The Ivory Coast international was a regular for PSV last season, playing 49 times in all competitions as Roger Schmidt’s side won the Dutch cup, finished second to Erik ten Hag’s Ajax in the league and reached the quarter-finals of the Europa Conference League. 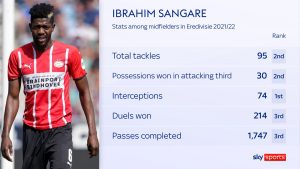 Sangare spent most of the season playing as the defensive midfielder in Schmidt’s 4-3-3 formation, with the graphic below showing how he excelled in a number of key metrics.

What are the health benefits of teas for women?