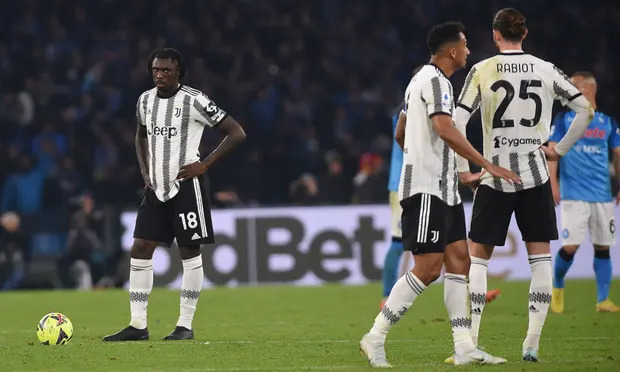 Juventus were hit with a 15-point penalty for false accounting on Friday after an appeal hearing at the Italian football federation. The punishment could eliminate the club’s chances of playing in Europe next season. With 20 games left this season, Juve were third in Serie A, 10 points adrift of the leaders, Napoli, who beat them 5-1 last week. The points deduction would push them down into mid-table, outside the spots for European competition.

The ruling is tougher than a nine-point deduction a prosecutor had requested earlier on Friday during a hearing looking at the way Juventus, Italy’s most successful club, and a number of other teams dealt with player exchange deals.

The former Juventus president Andrea Agnelli was banned for two years from football activities and similarly long bans were handed out for other members of Juve’s former board, which resigned en masse in November after an investigation by Turin public prosecutors into alleged false bookkeeping.

It also decided on a 30-month ban for Juve’s former sports director Fabio Paratici, who is now managing director of football at Tottenham. It is understood Tottenham are urgently seeking clarification as to whether Paratici’s ban extends beyond Italy.

Juventus have denied wrongdoing and were initially cleared by the sports court in April. But an appeal was made after the federation collected papers from the Turin prosecutors.

Juventus can appeal the decision to Italy’s highest sports court within the Italian Olympic Committee.

The news comes 17 years after the “Calciopoli” refereeing scandal that resulted in Juventus being demoted to Serie B and stripped of two Serie A titles.

At the start of the Covid-19 pandemic, Juventus said 23 players agreed to reduce their salary for four months to help the club through the crisis, but prosecutors claim the players gave up only one month’s salary. Turin prosecutors have also apparently discovered more alleged secret payments to their former player Cristiano Ronaldo that were not reported by Juventus.

11 Unhealthy Signs You Are Eating Too Much Sugar