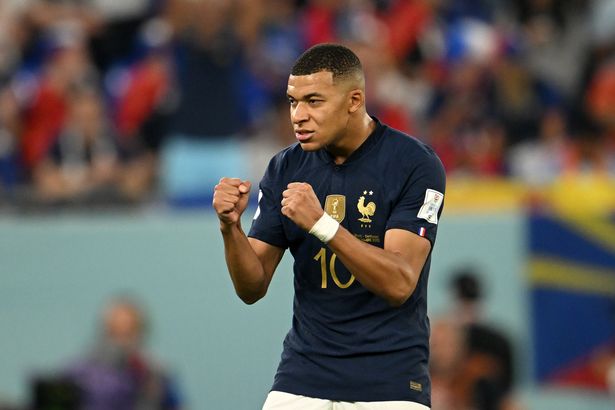 Kylian Mbappe netted two more goals for France as they defeated Denmark in Saturday’s World Cup action to match a tournament record that had stood for five decades.

Kylian Mbappe produced another virtuoso performance to equal a long-standing World Cup record held by the all-time great Pele. Mbappe netted twice to fire France to a deserved 2-1 victory over Denmark to seal their place in the knockout stages in Qatar. The Paris Saint-Germain striker scored either side of an Andreas Christensen header to secure the victory for Les Bleus.

The superstar striker is enjoying this World Cup, having already found the back of the net in France’s opening-game 4-1 victory over Australia earlier this week. It means he has bagged three goals at this tournament and is just one goal shy of equalling his tally from 2018.

That was the tournament when the then-teenage sensation starred as his nation lifted their second World Cup. Now aged 23, he is starting to justify why he is regarded as the best player at this year’s tournament – and many believe he can secure his second World Cup crown.

During the 2018 edition, the Paris-born striker equalled two long-standing records held by Brazilian football legend Pele. They are the only teenagers who have scored in a World Cup final – as Mbappe netted in the showpiece against Croatia – and the only teens who have bagged a brace in one game in the tournament.

In Qatar, Mbappe equalled another of Pele’s records that stood untouched for over five decades. The striker’s two strikes against Denmark took him to seven goals in the World Cup, making him the second player, after Pele, to reach that tally before his 24th birthday.

Mbappe broke the deadlock against Denmark with a deflected effort from close range, but French joy lasted all of seven minutes before Andreas Christensen headed Denmark level. However, Mbappe came to his country’s rescue – as he so often does – with a second from close range after a superb Antoine Griezmann delivery. France are the first team at the Qatar World Cup to seal their place in the last 16 of the competition – despite there being one full round of matches still remaining – and Didier Deschamps’s side are aiming to become the first team this century to retain the trophy.
.
Samuelboadu.com appreciate you a lot for reading!  If you enjoyed this piece by Samuel Kwame Boadu, kindly hit the share button and help others to also see it. You can also like our Facebook page, so you know when we make new posts or Click to JOIN our Telegram Channel where we post JOBS + TIPS
previous post