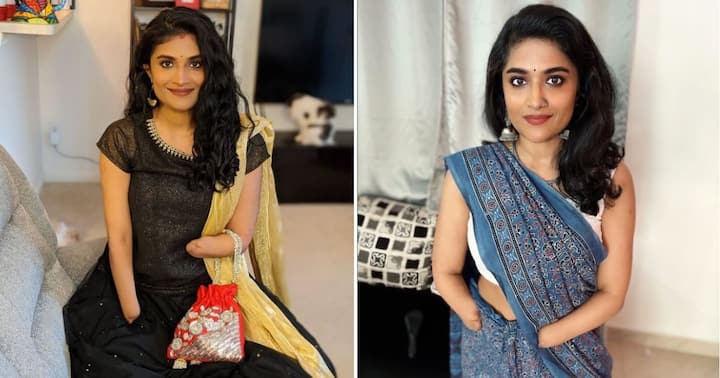 Malvika Iyer, a 28-year-old inspiring and brilliant woman who lost both her arms to a grenade as a child bags a doctorate degree from Indian Varsity.

Malvika who is from Rajasthan in India isn’t allowing her disability to get the better of her and is slaying in every area of her life, despite the tragedy that led her to lose her hands and damage both of her legs. At the age of 13, Malvika Iyer accidentally picked up a grenade, which blew her hands off and led to severe leg injuries, with the woman barely escaping with her life. Women Power Africa in a LinkedIn post noted that the woman was bedridden for two years after the incident and needed to undergo several surgeries over a two-year period while enduring a tremendous amount of pain.

She has come a long way from surviving a gruesome bomb blast at the age of 13 that blew off both her hands and severely damaged her legs, to winning the highest civilian honor from the President of India.” “Today, she is an award-winning Disability Rights Activist and International Motivational Speaker – inspiring millions of people to forget their limitations and take on the world with confidence and hope.” “When the bomb blew up my hands, the doctors were under a lot of pressure to save my life so they made some surgical errors while stitching back my right hand, the stump has a bone protruding out which is not covered by any flesh. But that very mistake has proven so incredible that the bone acts like my only finger. That’s how I type,” said Dr Malvika Iyer.  “The only disability in life is a bad attitude. “I have come to realize that I could be the President of India and people would still pity me. It’s in their nature.

Now I concentrate on my own abilities and not people’s reactions towards me. That’s all it took to change my life “The next time you see someone differently-abled, think about it – We are all people and we have to remember that at all times, those people didn’t choose to be born or have that disability, that is just how things go from time to time. Do not stand and stare, rather be empathetic, respectful and inclusive,” Dr. Malvika added.

Below are a few:

💎👑 Raj said: You have proved that disability is a mind set. It is appaling to see so many physically abled and mentally disabled. Hats off to your determination and an attitude to make living a good reason to be able to contribure. I pray for strength to follow in your foot steps. You are a great inspiration. Bravo!!

Deborah said: We’ll done for overcoming the obstacles you have, and congratulations Dr on your achievements. Things happen for good reasons – God has a plan. And just look at what a determined, resilient and beautiful young lady you have become. Without those awful things that happened to you as a child you wouldn’t have been able to tell such a wonderfully inspiring story now and be able to show the world what can be achieved in the face of adversity. It has made you who you are today. Kudos to you xx

Sandip said: Dr Malvika Thank you for sharing your story as you will be an Inspiration to millions that live life in pity as their life had some incidents that derailed them. I totally believe in the same thinking that’s it not over till you say it’s over. Proud of you and may you achieve new heights in your life and career.

Claude wrote: Despite your extreme challenges, You are Blessed, continue to see the Positive in everything and everyone. We appreciate your sharing your most moving story, that must have been a difficult task.  Your courage and determination are exemplary. May you continue to find meaning, continued Faith and success in all you do. continued success and Blessings

Build Financial Confidence not Financial Freedom and here is why

Mitchell Mhlanga Dropped Out Of Law School goes back to school, Bags Masters Degree at Jiangxi University, Her Story Inspires Many

Juliet Owusu-Agyeman: Meet The Ghanaian Midwife Who Is Also A Model

Photographer Elroy Salam aims to save lives with his work