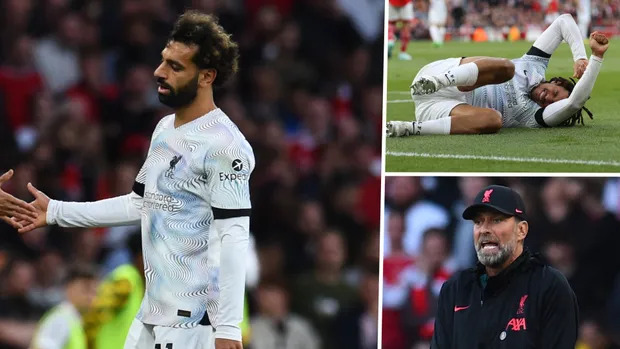 Forget the Premier League title, Liverpool will face an uphill battle to even finish in the top four this season. The Reds’ nightmare start to the campaign reached a new low on Sunday, beaten 3-2 by table-topping Arsenal, who move 14 points ahead of Jurgen Klopp’s side as a consequence.

Liverpool, who remain without an away win this season, certainly had their chances at the Emirates, twice levelling through Darwin Nunez and Roberto Firmino, but eventually succumbed to Bukayo Saka’s 76th-minute penalty, after a careless foul by Thiago Alcantara.

This is now the Reds’ worst start to a campaign in 10 years. They have dropped points in six of their first eight league games, and have only scored first in one of them. They conceded inside a minute here, Gabriel Martinelli firing home, and though they showed spirit to fight back, poor defending and a lack of punch in the final third cost them once more.

For Klopp, who saw Luis Diaz and Trent Alexander-Arnold forced off with injury and substituted the out-of-sorts Mohamed Salah, the questions are mounting.

This is Liverpool, but not as we know them…