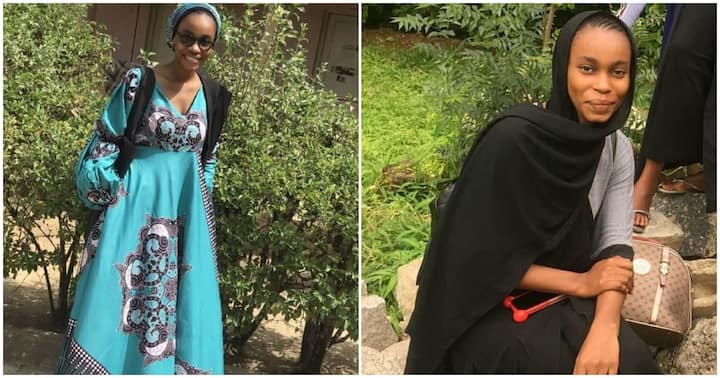 Musa Muminah Agaka is her name. Due to the significance the feat carried, many would have imagined she entered university with a goal to at least graduate with a first-class, but the 22-year-old never had that in mind, as she would reveal in an interview with YEN Gh

Muminah engaged in menial jobs to support her mum Young Muminah didn’t imagine that she’d be fatherless in the year 2007, but that was the case anyways. The lady told YEN’s Victor Duru that she was raised by her single mum after her dad who worked as a lecturer passed away.

Her mum who worked as a health attendant automatically became the breadwinner, caring for 5 children all alone. Muminah said she had to do menial jobs to support her mum and it was out of her own volition.

“It was the need to support my mum that led me to start selling things (though I was never forced to do so)…The first thing I remember selling was cocoa (one sweet Bonvita…Then later veils, materials, okirikas, so many things …I also did henna artwork and still do this, she said.”

Muminah said breaking the 38-year-old record was never her intention The serial entrepreneur told YEN that she never entered ABU with the intention of bagging first-class, let alone shattering a record that has stood for 38 years. According to her, she was only focused on doing well at school to encourage her mum.

Muminah recalled an emotional moment she had 5.0GPA in a semester and the reaction of her mother.

“…The drive for the quest of me breaking the record popped up when I had a 5.0GPA and I saw that bright light on my mother’s face ….Not the first of its kind actually, but that very day it came with tears…I feel so happy and wished to see more of that.”

She admitted achieving the feat came with lots of sacrifices.

Muminah shares her study routine On her study routine in school, Muminah said she read mostly at night and usually took break from studying on weekends. She also engages in 3 hours discussions with her course mates on what they were taught in class. The discussion is taken online on social media platform WhatsApp in the event that a physical meeting is not possible.

The brilliant lady shared another trick that helped her in school.

“..I try to also explain to whoever is finding it hard to understand (I learnt that knowledge is only useful when you instill it in others). By doing this I realised it sticks more to my head and more ideas on the whole discussion keep poping up in the course of me explaining,”

On how she dealt with school tension, Muminah said:

“My friends and I do hang out 3times every semester; the beginning of the semester before lecture proper, just before we start proper reading for exams and after our last papers…It really do help reduce tension.”

How to spice up the ‘Interests’ section in your CV