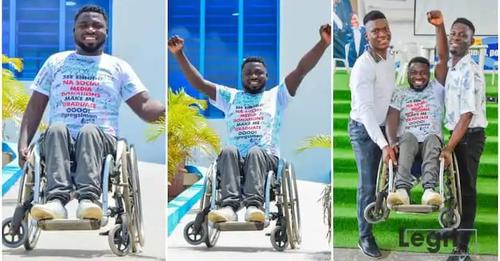 A young man identified as Greg Simon is thrilled as he graduates from University and shares his inspirational story. Greg who is from Zonkwa, Kaduna State, was not born disabled, as all parts of his body were in good condition at birth. Even his parents never expected that the life of their son would take this turn.  But it just happened that one day, Simon had a slight body temperature and was rushed to the hospital for treatment.

Without proper checks, Simon was given the wrong injection which instantly worsened his health condition. Before anyone could realise what was happening to the five-year-old, he was already paralysed. He had polio and no one knew about it until it was too late. He has beaten the odds to grow into a handsome young man. “I was given the wrong injection at age five. I had a slide body temperature, and was taken to the hospital.

After an injection giving to me, my legs got paraly!zed.  “After a year I was taken to Dala Hospital for therapy and was diagnosed and confirmed I had Polio,”  Simon told his story to Legit.ng: Growing up henceforth was tough and became tougher after losing his mother two years after being confined to the wheelchair.  He said: “Not easy especially as I grew from the North. I attempted suicide three times but God saved me. Then even parents don’t want me to associate with their kids for fear of becoming disabled. Most people told my siblings that I can’t go far in life but grace saved me.”  Her sister became his saving grace as she had to marry early to be able to look after him and his other siblings.  “From 8 years to 19 years, I was just living with the hope that I will die without a name coupled with the fact that I lost my mom when I was just 8 years. That’s two years after being confined in the wheelchair.  Speaking on how he managed to go to school and get proper education Simon said: “Well! My father abandoned me when I got disabled. So our firstborn had to marry in time to be able to take care of us. So my father was just like a dead man alive to me.  His words were ‘”he can’t waste money on a child without legs.” Yes after her death my elder sister took over.”

Narrating his higher education journey, Simon said: “A beautiful journey with great memories for my future kids and an inspiration to everyone.  “In 2019 I processed for my admission without a dime. After getting the admission, I posted it on my Facebook. Lots of people donated from 500 to 1k and above.  “That was how I raised over 800k for my first year. Same thing second year and final year.

Yet I knew it was a private university but because of accessibility, I opted for a private university to ease stress for me.  “Yeah from year one to my final year. My feeding, accommodation tansportation and hand out are sponsored from friends on social media.”  The graduate of Performing Arts and Film Studies said: “I want to produce films that will showcase disability as a blessing not a curse as mostly portrayed in Nollywood. That’s my dream: To be the baddest director sitting on the wheelchair giving roles to people with legs, lols.”  Simon wants to meet Don Jazzy, Williams Uchemba and Obi Cubana One of the goals Simon has set for himself is to meet three personalities whom he believe could positively affect his dream career.  In his words: “The only thing I want to say is I want to meet three people in this life. I have goals written, ideas I want to unleash not just for myself but for millions with disability without a voice.  “They are: Actor Williams Uchemba, Don Jazzy and Obi Cubana. Believe me if I meet these persons I think I will wheel my wheelchair from Ibadan to Lagos in thanksgiving.”

Caleb Anderson, boy who gained admission into Georgia Institute of Technology at 12, to become Aerospace Engineer

Blessing Omowumi Confined to Wheelchair at Age 10, Graduates from School Against All Odds