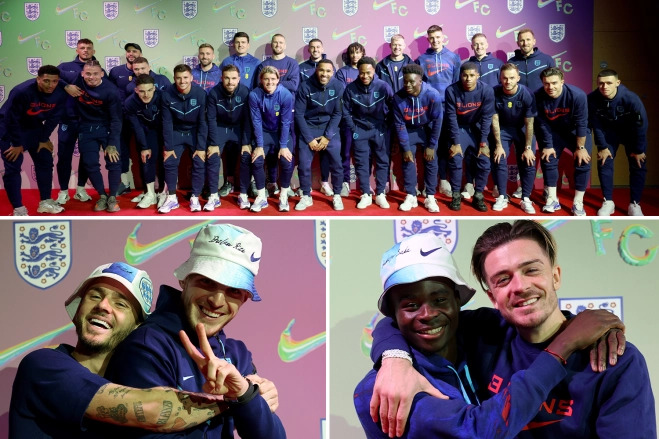 ENGLAND’S World Cup hopefuls met up today and attended a Nike Town event before jetting out to Qatar.

England will fly to Doha tomorrow, before their first training session at the Al Wakrah sports complex on Wednesday.

And Harry Kane and Co were all smiles as they reported for duty.

Tottenham striker Kane will captain Southgate’s troops as they look to improve on the semi-final defeat from 2018, and the Euros final heartbreak last year.

Callum Wilson and Mason Mount shared a laugh as they were reunited just two days after Wilson’s Newcastle beat Mount’s Chelsea in the Premier League.

There had been concern for Maddison after he limped off injured in Leicester’s 2-0 win at West Ham on Saturday, but the playmaker confirmed after the game he would be fit for the World Cup.

Hammers midfielder Declan Rice gave a thumbs up as he arrived at England HQ, while Harry Maguire cracked a huge smile as he wheeled his suitcase into the building.

Teenage star Jude Bellingham was also pictured reporting for duty after jetting to the UK from Germany.

After their warm greetings, Southgate’s gang then assembled to attend a Nike Town event at SGP.

And they appeared in jovial mood while posing in numerous poses donning Nike attire as excitement continues ahead of the tournament.

Man City’s Jack Grealish and Arsenal’s Bukayo Saka put their title rivalry aside as they embraced for a snap.

And both Callum Wilson and Trent Alexander-Arnold still looked ecstatic over their call-ups as they stood alongside each other in front of the cameras.

The Three Lions kick off their campaign against Iran next Monday.

Further group fixtures against the USA and Wales follow.

Southgate announced his 26-man squad for the tournament last Thursday.

Toon striker Wilson and Chelsea midfielder Conor Gallagher were the shock picks, while Maddison could not be overlooked after his stunning club form.

Meanwhile Manchester City duo Kyle Walker and Kalvin Phillips have won their respective races to be fit enough to feature in Qatar.

Walker has not played since having groin surgery at the start of October, while Phillips returned to action last week after being sidelined since September following shoulder surgery.