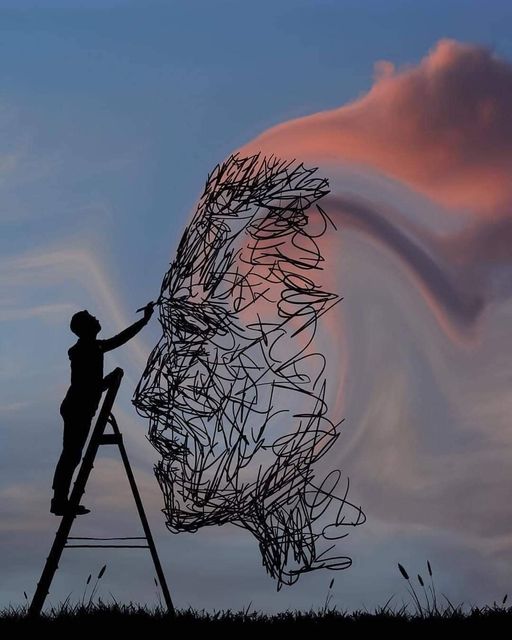 (The Impossible Is Possible) : Alexander Graham Bell was considered a lunatic when he talked about a device that would transmit the human voice over long distances through wires. He was told that his invention, called the telephone, was impossible. But Bell invented it.
.
In 1903, the Wright brothers built an airplane called the Wright Flyer I, which featured wooden propellers the men had designed and carved themselves. The plane also had a gasoline engine. After weeks of unsuccessful attempts, the craft – with extra fabric incorporated to increase the stiffness of the wings – took flight for 12 seconds on December 17, 1903, traveling 120 feet before landing. The plane worked! Both brothers flew the craft a few more times that day. They had flown the world’s first successful piloted engine-powered airplane. Man could then fly in the sky without wings!
.
On 12th October 2019, Eliud Kipchoge, the Kenyan professional long-distance runner, became the first athlete to run a marathon in under two hours, slashing 20 seconds off the mark to finish at 1:59:40. After completing the marathon and in true trailblazing style, Kipchoge stated “Now I’ve done it, I am expecting more people to do it after me.” It was thought to be impossible before he did it. In 1954, Roger Bannister became the first athlete to run a mile in under 4 minutes, a feat never achieved until the middle-distance runner did it with a miniscule 0.6 seconds to spare.
.
On May 29, 1953, Edmund Hillary and Tibetan mountaineer Tenzing Norgay were the first people to reach the summit of Mount Everest, the highest mountain in the world. In less than 70 years after, thousands of people have now reached the summit of Mount Everest. Though Hillary and Norgay only spent 15 minutes on the summit of Mount Everest when they first reached there but they showed the world that it can be done. They showed other mountaineers that it was possible.
.
Napoleon Hill, author of “Think and Grow Rich” said one of the first things that he did when he purchased a dictionary was to look up the word impossible and then neatly cut it out – so it was not a part of his vocabulary.
Certain challenges inherit the label “Impossible” because either, people have tried and failed, or, no one has been brave enough to attempt them. But an audacious few stand up and make a change. They pour their effort into upsetting the status quo.
.
Impossible is a mindset; it is not an unbeatable physical barrier. Many people in the past and in our contemporary time have proved impossible wrong and chased a new reality. The legion of “firsts” in different fields of human endeavour is overwhelming. You can join, too. You, too, can make history.
.
Read Also : Focus on your own Growth
.
Often, you don’t need to climb Mount Everest or solve an unsolvable problem in Advanced Mathematics, but you only need to do what people think cannot be done. Be the first person in your family to become wealthy. Be the first person in your state to become a professor in a certain discipline. Break the record in a certain department in a university. Be the first author in your country to make billion dollars from books. Succeed even when people think you cannot succeed.That is how to make the impossible possible.
.
Go out everyday with the mindset that impossible is only a word; it does not hold true in realty. That it has not been done does not mean that it cannot be done.
.
Hope i inspired you today and if you want the best service providing firm then contact SamBoad Business Group LLC
.
Image Credit(Disclaimer) : I do not own right to the Image Used
.
SKB News Magazine appreciate you a lot for reading!  If you enjoyed this, kindly hit the share button and help others to also see it. You can also like our Facebook page so you know when we make new posts or Click to JOIN our Telegram Channelwere we post JOBS + TIPS
previous post

The Power Of Self Search : Steps to Self Discovery

Be Conscious Of Your Circle

What it feels like to be on the Ladder of Success: The Rise and Fall

The Leftovers : How to Achieve More with what is left of You

[…] you until they hear the good experience of someone who has bought from you before. . Read Also : The Impossible Is Possible . 5. WHAT TIPS COULD YOU GIVE TO A PASSIONATE AUDIENCE? Beyond your products solving problems, […]

King Charles banknote design revealed by end of year – but when...