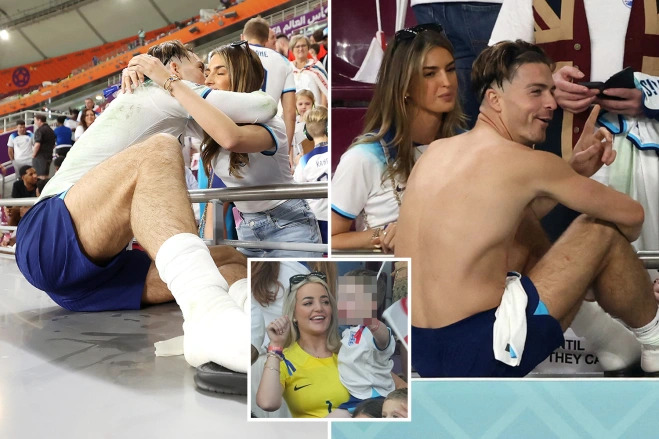 A TOPLESS Jack Grealish led England’s World Cup celebrations as he jumped into the stands to savour the moment with his girlfriend.

The Manchester City midfielder got the final goal in a 6-2 drubbing of Iran and was pictured with partner Sasha Attwood after the game.

She and the other Wags of England stars descended on the Khalifa International Stadium to watch the Three Lions tear apart their opening World Cup opponents.

The footballers’ wives and girlfriends had to leave their luxury £1billion cruise ship to get to the ground – and they will be very impressed with what they saw.

It allowed the 27-year-old to score his World Cup goal – and celebrate with his influencer girlfriend after the game.

The impressive Harry Maguire was also spotted rejoicing with his love ones after the game, with the beleaguered defender providing the best answer to his critics with a strong performance.

But he was later subbed off with a head injury.

England’s glamorous Wags filled the stands for the game in Doha.

Jordan Pickford’s wife, Megan Davison, 26, was in attendance at the stadium, along with Kyle Walker’s partner Annie Kilner.

Maguire’s sister Sister Daisy, 22, uploaded a series of snaps on Instagram, including a view from their balcony aboard the luxury liner, a shot of the inside and another of her arriving at the Khalifa International Stadium.

Defender Conor Coady’s wife Amie shared pictures of herself and their three sons – Henri, Freddie, and Louie – all in “Coady 16” jerseys outside the ground.

And the Arsenal star’s girlfriend Tolami Benson, 22, celebrated by proudly sharing a snap of herself wearing an England jersey before being spotted in the stands ahead of kick-off.

Now You Are A Spectator, What’s Next? The Karim Benzema Ballon D’or Effect