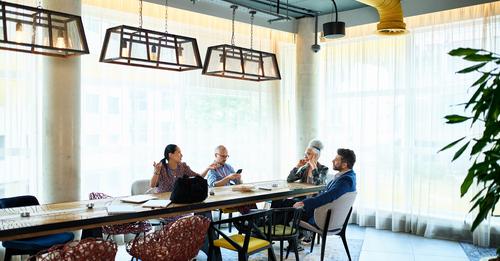 10 things not to say in a job interview: With the jobs market more competitive than ever it can be hard work just to get an interview, so once you’re actually in front of potential employers you don’t want to ruin your prospects with an ill-chosen comment.

Sadly, some job hunters still do speak before they think. Mr. Salifu Abubakar, Head of Marketing and Development at Priority Insurance Company Limited , says he can recall many instances of interviewees saying the wrong thing. “I remember when one man was asked why he wanted the job, he replied, ‘Because my mum thought it was a good idea’,” he says.

He adds that some job hunters have also been known to say they’ve applied for a job “because it will pay the rent while I look for a job I really want to do”, and a common response to a question about what candidates like to do in their spare time is “go to the pub”.

Mrs. Gifty Lah-Anyane, Head of Human Resource at Priority Insurance Company Limited, says candidates should avoid discussing religion and politics. “Employers like people who can talk passionately about their own interests as it helps them to get to know you as a person. But we would always advise against sharing your views on these two topics without knowing if the interviewer shares that point of view.”

We asked Samuel, Gifty and Salifu Abubakr  of  Priority Insurance Company Limited for their list of the top things to avoid saying at a job interview:

1 “Sorry I’m late.” It goes without saying that punctuality is key. Your interviewer doesn’t want you to arrive for work 20 minutes late every morning.

2 “What’s your annual leave and sickness policy?” It doesn’t look good if, before you’ve even been hired, you’re planning your absence from the company.

3 “I’ll just take this call.” Gifty Lah-Anyane says a large number of candidates think it is OK to take telephone calls, texts etc during an interview. It isn’t.

4 When asked, “Where do you see yourself in five years?” never say, “Doing your job.” As much as this might be a genuine answer, Samuel Kwame Boadu says candidates should “try to build a response around the experience they would like to have gained and the level of responsibility they’d like to have, rather than threatening the interviewer’s job.”

5 “My previous employer sucked.” No matter how mind-numbingly boring those roles might have been, “speaking badly of a previous employer is not only unprofessional, but also reflects on your character,” Salifu says. Your new employer will contact your former employer for references following an interview, so it’s never wise to burn your bridges.

6 “You make widgets? I thought you made cricket bats.” Failing to research your prospective employer fully is a big faux pas. “Saying you’ve looked at their website is only marginally better – employers expect far more research,” Gifty Lah-Anyane explains.

7 “Bloody hell.” Never swear in your interview. It can happen, especially if your interviewer is themselves prolific with the profanities, but don’t let them set the standard of the interview and remain professional at all times.

8 “I was very good at sorting out PEBs by using ARCs.” Don’t fall into the industry jargon of your previous employer or assume the interviewer knows anything about your experience, Samuel Kwame Boadu advises. Instead, speak clearly about your skills and experience to avoid any confusion or misunderstanding.

9 “Do I really have to wear that uniform?” Any criticism of staff uniform will go down like a lead balloon. Do you think your interviewer enjoyed wearing that fluorescent green ensemble when they performed your role?

10 When asked, “What do you expect to enjoy most about this role?” never reply with any of the following: the perks, the pay, lunchtimes, my co-workers or the holidays, Gifty Lah-Anyane says.

Read Also : How to self-assess your skills

Guided by Samuel Kwame Boadu ( Below is his Instagram Page)

Raise your Standards to Survive in Africa, Here is Why

How to Excel in a Competency-Based Interview

Does your CV pass the 30 second speed test?

How to start a Travel Agency