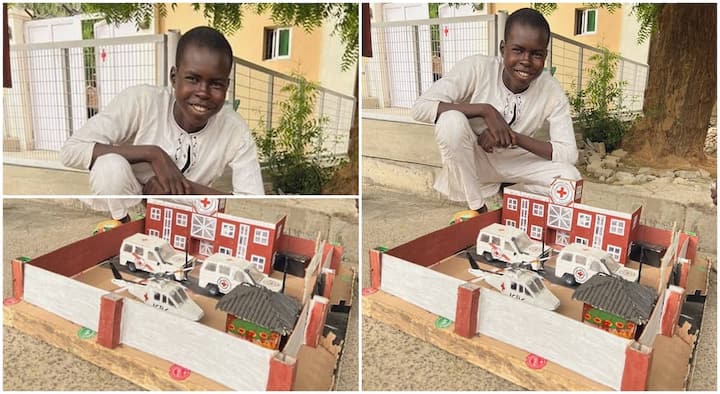 A kid identified as Aji Bukar who is clearly very creative has created an architectural design, an impressive replica of the Red Cross office building The work which is very artistic was gifted to the Red Cross in Maiduguri, Borno state and it has moved many lovers of good things who saw it online Aji designed the office building with local materials such as wood and it is nicely painted in the colours of the humanitarian body

Creativity has found full meaning in the hands of a young boy named Aji Bukar who has used local materials to design the architectural replica of the Red Cross office building. The replica has spaces for ambulances as well as a helipad. Two ambulances and a helicopter

It looks real The work is actually very real even though it is just an architectural design or prototype. The nice painting given to it by the boy made it come alive. The boy presented the work as a gift to the Red Cross in Maiduguri, the Borno state capital in recognition of their work in the state. Aji Bukar said he created the gift for the body because it brings a lot of good into the world.

The photo was later shared on Facebook by the humanitarian body

Mohd Maidugu said: “He is humanitarian. As young as he is he has the empathy.”

Kwesi gets ‘prophecy’ Abdulmaleek Mohammed commented: “Wow! He needs to be sponsored to further his education.”

Es Madakan reacted: “Wow. What a change from all these depressing stories on social media.”

Yusuf Ibrahim said: “He deserves a good reward, at least a Scholarship.”

Click on t.me/iamsamboad1 to join our Telegram Channel that posts Jobs & Tips

Should you pay someone to write your CV?

Meet Mercy Oyinnua Osayi: From Asokoro To Graduating With Distinction In Medicine From Birmingham University

Robert Lewandowski: Bayern Munich want £52m from Barcelona if they are to...