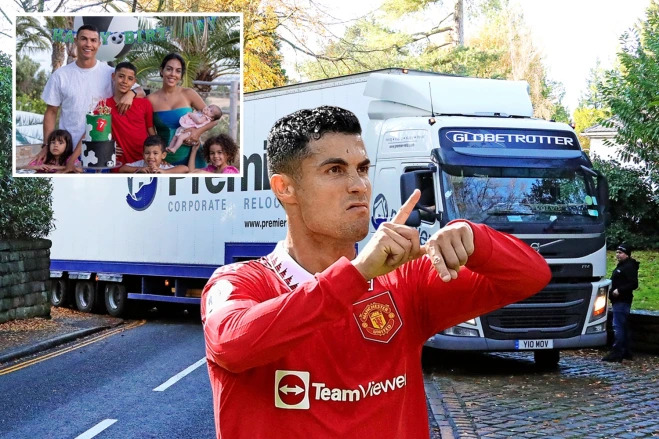 A BEEFY removal lorry sent to empty Cristiano Ronaldo’s Cheshire mansion was too BIG to reach the house. Ronaldo, 37, is a free agent after being axed by Manchester United following his bombshell interview with Piers Morgan.

He is currently on World Cup duty with Portugal and scored in their 3-2 win over Ghana on Thursday. Back in Cheshire a lorry was sent on Friday to collect belongings from the £5million rented mansion where he lives with partner Georgina Rodriguez and his five children. That’s after his his £150,000 Cadillac Escalade and £300,000 Bentley Flying Spur were loaded on to a transporter on Tuesday.

But this time the lorry had to leave empty-handed. The huge truck couldn’t turn into the steep private road where Ronaldo’s pad is. After an hour of trying to weave its way into the property and holding up traffic it eventually gave up. A smaller lorry will now need to be hired in order to reach the property and pack up Ronaldo’s things, which includes an extensive trainer collection w. Ronaldo’s flash motors were taken away on Tuesday – before his departure from Old Trafford was announced.

The striker was sacked by United after saying he felt betrayed by the club and did not respect manager Erik ten Hag. The Red Devils confirmed on Tuesday evening that they had ripped up his £500,000-a-week contract with immediate effect.

In a statement earlier in the week, Ronaldo said: “Following talks with Manchester United, we’ve mutually agreed to end our contract. “I love Manchester United and I love the fans, that will never ever change.

“It feels like the right time to seek a new challenge. I wish Man Utd all the best.”

Decorators will touch up the £40,000-a-month mansion, with Georgina, 28, currently still in the UK while Ronaldo is in Qatar.