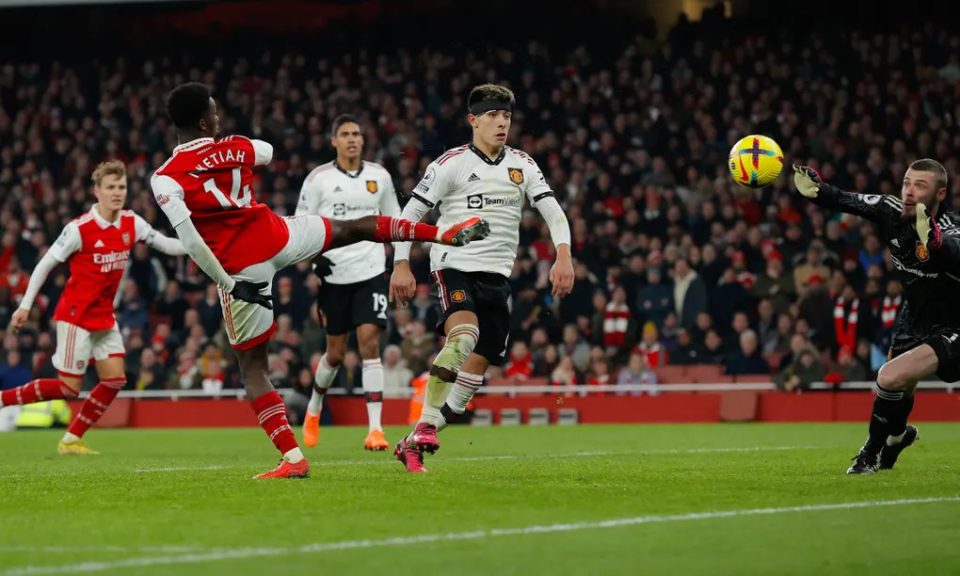 Eddie Nketiah : Striker’s emergence has had no sense of inevitability and he is showing how fine the dividing lines of fate in football can be

Managers can map out the league in immense detail. They can work out when they might rest players, when training might be stepped up or relaxed. They can plot when they might use a back three or a back four. They can draw up contingencies: if he is out then he can play here, or we can switch him over there. And then sometimes, even in the days of multi-layered squads, of two or more players for every position, things just happen.

Maybe that is unfair on Eddie Nketiah. Maybe Mikel Arteta always had faith he could deputize for Gabriel Jesus. Maybe it’s unfair to think of him as an unlikely matchwinner. But Sunday against Manchester United was his fifth start of the season. And it was the first day of his life when his number of Premier League starts for Arsenal (24) exceeded his age (23).

Perhaps that is unfair, but there are two possible scenarios that demonstrate just how contingent success can be. Imagine Nketiah had not guided home that mis-hit Martin Ødegaard shot in the 90th minute. Then the outstanding memory of him from the game would not have been his close-range header to equalise after 24 minutes, but the chance that fell to him with six minutes remaining. In a crowded box, space suddenly opened up, a corner dropped kindly and … David de Gea made a very good save.

Suddenly, that snapshot would have been filed alongside the excellent save Nick Pope made from Nketiah late on against Newcastle. Could he have done better? Would a more clinical finisher have guided his shot slightly nearer the corner, have given the goalkeeper no chance? Two chances not taken, four points left on the table and, it would have been asked, can you really afford such profligacy with Manchester City on your tail?

Or what if Arsenal had completed the signing of Mykhailo Mudryk? Like Chelsea, they would probably not have started him at the weekend, but with Arsenal chasing a winner, it’s likely, no matter how well Arsenal was playing in that final 20 minutes, Arteta would have introduced him. It could easily have been Nketiah who made way, perhaps with Gabriel Martinelli shifted into the middle to accommodate the Ukrainian.

Without his winner, Arsenal might not have had this sense that the sweep of narrative is carrying them to glory. That is important. Destiny doesn’t exist until enough people start to believe in it and then it can have a remarkable effect on the confidence. Over the past couple of weeks, with victories over Tottenham and Manchester United, this has begun to feel like a successful title run-in. In that, perhaps, lies the principal note of caution: this is not the run-in. Arsenal still has half a season to play. There is plenty that can go wrong, and 19 games is a very long time to live with the sort of nervous anxiety that carries players – and fans – down the home straight, even those who have begun to believe this is meant to be.

Nketiah’s goalscoring ability has never really been in doubt – which, thinking of the Pope and De Gea saves and what the reaction might have been had Arsenal not won, suggests just how unfair or misleading our judgments can be when isolated incidents thrust themselves to the forefront of our minds. He is the all-time leading goal scorer for England’s Under-21s, with 16 goals in 17 games. In his first season at Arsenal after being released by Chelsea, he scored 15 in 16 for the Under-18s and 12 in 26 for the Under-23s. He’s got seven in his past seven games and is Arsenal’s leading scorer in all competitions this season.