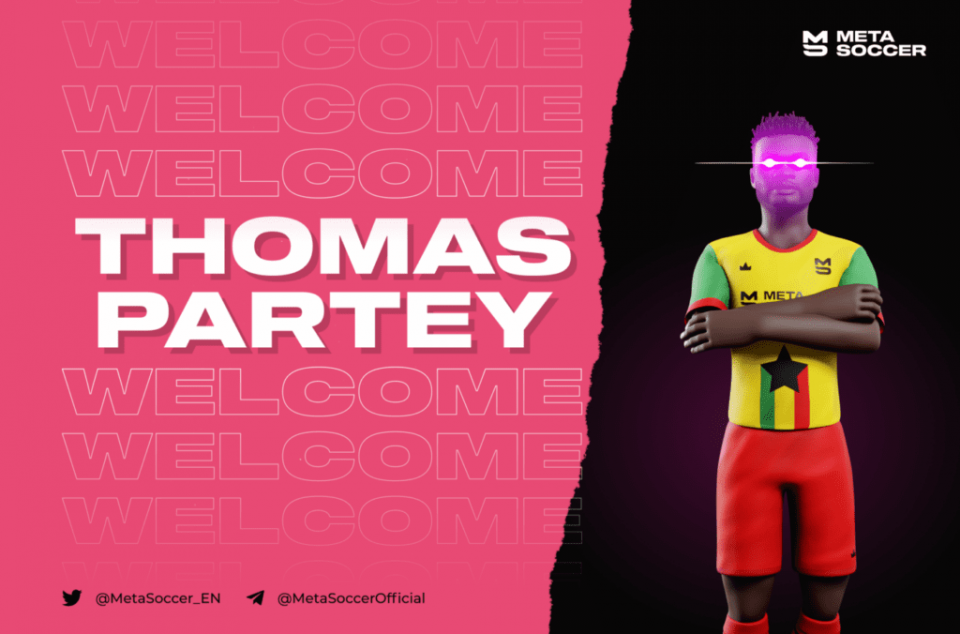 Ghana midfielder Thomas Partey is the first African player that is available to join a lucky team in MetaSoccer game, as an NFT playable character.

The Arsenal midfielder joins other players signed out the platform such as Dani Carvajal of Real Madrid, the former Brazilian player Ronaldinho Gaúcho and Emi Martínez of Aston Villa which was created by Spanish entrepreneurs.

MetaSoccer is a game in which its users have their own club, for which they sign and train their players with whom they face other people or the system, with the possibility of generating income for their achievements through both cryptocurrencies linked to the game.

This game will create 100 NFT (non-fungible token) of the Arsenal side that the players of this universe will be able to obtain to use in their teams and make it evolve to improve their skills.

Partey’s NFT has been for sale in 2022, and we will share details about the drop soon. There are many more world renowned players lining up to be a part of our soccer metaverse, so hang in there for further announcements.

This game is founded by three Spaniards, Patxi Barrios, Marc Cercós and Alex Fiestas, at the head of the company Champion Games, which previously launched the game Mister Fantasy, another game about soccer, although in this other they add the component of cryptocurrencies.

MetaSoccer is the first blockchain-based soccer metaverse where users can create their own club and generate income while playing (Play-to-Earn).

A whole soccer ecosystem where users can participate full-time as club owners or managers while having fun and generating income. MetaSoccer embraces multiple revenue streams such as: NFT asset drops, fees from different transactions across the ecosystem (marketplace sales, betting, token swap…), sponsorships and broadcasting.

📣 The above article is for information purposes only and is not intended to be a substitute for professional medical advice. Always seek the guidance of your doctor or other qualified health professional for any questions you may have regarding your health or a medical condition.