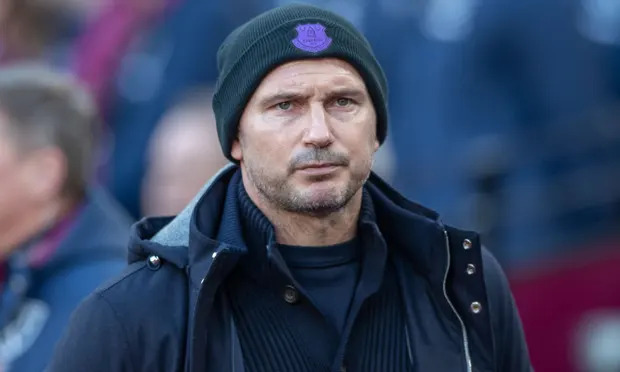 Frank Lampard vowed to “dig in” after a damaging defeat by West Ham in a crucial clash at the bottom of the table left Everton’s manager clinging to his job.

In a potentially significant development Everton’s majority shareholder, Farhad Moshiri, was at the London Stadium to watch Lampard’s side slip deeper into relegation trouble. Moshiri had not attended an Everton game since October 2021 and he could decide that it is time for a change of manager.

Asked about Lampard’s future after the game, Moshiri said that it is not his decision to make. It was later clarified that any move would be agreed with the rest of Everton’s board. Having stayed away from Goodison Park before last weekend’s defeat by Southampton, the rest of Everton’s directors joined Moshiri at the London Stadium.

They would have seen Everton’s fans hold up banners decrying “a board full of liars” and the team deliver another poor display. West Ham climbed out of the bottom three after two goals from Jarrod Bowen, potentially saving David Moyes from being fired, and left Everton in 19th place after a run of 11 defeats in 14 games in all competitions. It would come as little surprise if Lampard is fired.

Lampard, who hopes to improve his squad before the transfer window shuts, vowed to fight on after being asked about his future. “Those things are not my choice, it is my job to work, focus and keep my head down,” he said. “I know there’s things going on at the club but it’s never been a consequence for me whether a chairman or board member is at the game.

“I was at Chelsea for 18 months and the owner didn’t come to one competitive game. It’s not for me to guess what he thought about the game. We stayed up by the skin of our teeth last year and were five points shy of safety with not many games to go.

“I’ve said that we might stay where we are and was questioned whether that is competitive enough talk. But if you are in a club where the club has moved downwards with serious investment, the conditions now are that we don’t have that investment and we are trying to rebuild. That doesn’t mean straight away you start climbing stairs. It means you have to dig in as a club and I’m prepared to dig in.”

Kenwright refused to discuss whether Lampard is at risk of being sacked. “It’s been a bad run of results for us all, and for Frank, but I would never say that to you,” he said. “We’ve just got to start winning, haven’t we?”

West Ham’s first league win since 24 October was a huge boost for Moyes, who has been backed by his board. “I think it’s a relief to the club itself,” West Ham’s manager said. “I really hope Everton stick with Frank. He is a top bloke, but I have to think about my position because winning one game doesn’t mean everything is fine.”