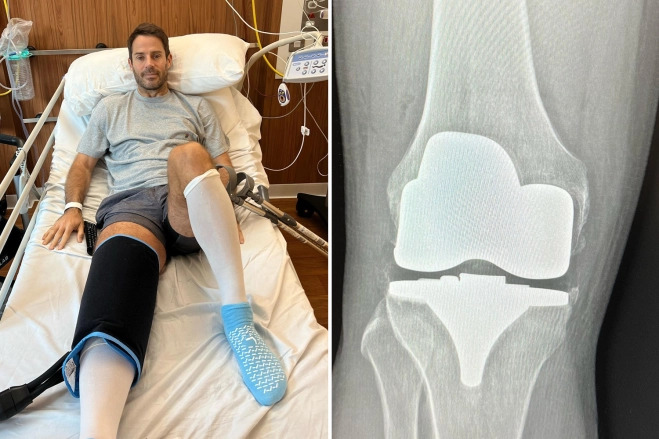 The former footballer-turned-pundit has made no secret of his knee issues in the past. Redknapp, 49, was plagued by joint problems during a glittering club career with the likes of Liverpool and Tottenham. It eventually forced the 17-time England international to retire from the game aged 30.

In total, Redknapp has had an incredible 12 surgeries on his right knee. But he now felt the time was right to finally take the plunge and get a knee replacement. Having welcomed son Raphael with 39-year-old wife Frida Andersson last year, Redknapp felt it was prudent to take action after a lifetime of pain.

And in the meantime, the son of legendary manager Harry admits he’ll be taking full advantage by watching the rest of the World Cup from bed. Redknapp wrote on social media: “So I have finally decided to fix my knee and get a full knee replacement.

“When I was just 18 I had of all of the meniscus removed from the inside of my right knee, hence making it being bone on bone and taking away the cushion that protects it.  “It has given me constant problems since. Whilst I was playing I had to have physio appointments at all hours.  “With the help of the incredible Kevin Lidlow it was a constant battle to keep the swelling down and pain under control, but after at least 12 surgeries I have decided to have it done.

“At 27, I was lucky enough to meet an amazing surgeon called Richard Steadman. He managed to give me a few more years of my career, before I had to retire from the game I love at 30 . “Having a young baby has also made this decision easier, as I need to be as mobile as possible so I can chase that little speedy rascal around. “I want to thank you Dr Sweetnam, and your great team, for looking after me so amazingly well.

“As you can see on pic 2 I assume I will be setting off the X-ray machines at the airport with my new titanium knee . “So here is to a new beginning, I’m excited for this next chapter. “And watching all the World Cup games is going to make this rehab a touch easier.”