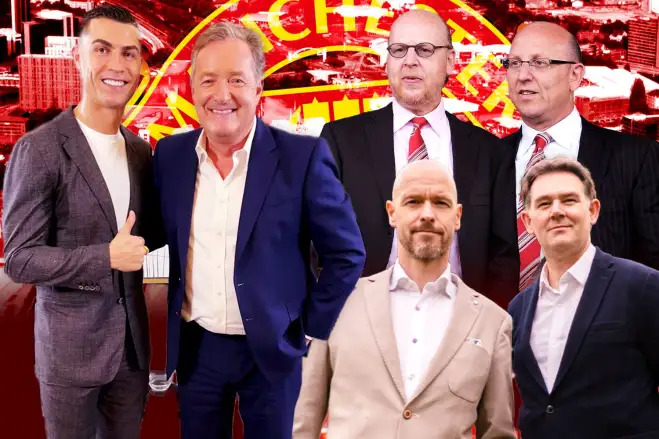 The Red Devils forward, 37, went public with his grievances against the club, the manager, Ralf Rangnick and even Wayne Rooney in a scathing and honest conversation.

It seems unlikely Ronaldo’s future remains at Old Trafford after he said he felt betrayed by United and was made to feel like he was blamed for everything going wrong at the club.

But the 37-year-old reckons the club has not progressed since the legendary boss’ retirement nine years ago – then added he does not respect current gaffer Erik ten Hag in a major claim.

Now The Telegraph have reported Old Trafford chiefs will sit down with Ten Hag for emergency talks regarding the latest situation.

And they will try and work out what action needs to be taken against the five-time Ballon d’Or winner, who was suspended for refusing to come on against Tottenham last month.

United are said to be deeply frustrated with Ronaldo for going on the record with the public interview, which will be shown on TalkTV this week.

The forward – who missed the last two games before the World Cup by telling the club he was ill – is not expected back at Carrington until after the tournament, where he will captain Portugal in Qatar.

However, the club will hope to have resolved their own stance long before that – starting with today’s discussions.

Ten Hag, chief executive Richard Arnold, football director John Murtough as well as co-chairman and owner Joel Glazer are set to be part of the conversation.

United found out about the interview on Sunday evening, just before the team boarded the plane back to Manchester following the last-gasp 2-1 win at Fulham.

However, the club decided not to comment last night to keep the focus on the victory, which leaves United three points off the top four with a game in hand.

The Telegraph report adds that despite acknowledgement and respect for what Ronaldo has achieved in football, his recent behaviour has disappointed a number of players.

One source said there will “not be a tear shed” if and when Ronaldo leaves while another claimed the dressing room was “not allowing Ronaldo’s tantrums to distract them”.

Watch ‘Piers Morgan Uncensored: 90 Minutes with Ronaldo’, 8pm on Wednesday and Thursday on TalkTV. Find TalkTV on Sky 526, Virgin Media 606, Freeview 237, Freesat 217 and Sky Glass 508, live and on demand on the TalkTV app, streaming services and at Talk.TV