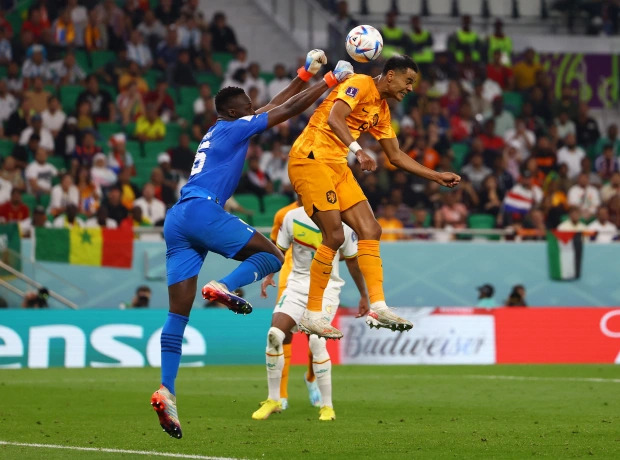 HOLLAND left it late but got Louis van Gaal’s final World Cup off to a winning start. Goals from Cody Gapko six minutes from the end and substitute Davy Klaassen in injury time rescued a drab game and gave Van Gaal’s men all the points.

Gakpo just nipped ahead of Chelsea goalkeeper Edouard Mendy to meet Frenkie De Jong’s in swinging cross and head the ball home to break the deadlock. What a moment for the PSV striker voted player of the year in Holland last season. A big reason why both Manchester United and Leeds United were looking at taking him last summer. He has learned his trade under Red Devils great Ruud van Nistelrooy at PSV as his former youth and now first team coach. He used all Van Nistelrooy’s instincts to sniff out this chance and get the winner.

Then injury time the Dutch broke and when Memphis Depay’s shot was parried Klaassen pounced. Up until that point it had been the Senegal fans band that had provided most of the entertainment in the Al Thumama Stadium with neither goalkeeper being tested. After a first minute scare for the Dutch the best of the chances fell their way in a goalless first half. But when Ismaila Sarr nicked the ball off Matthijs de Ligt it looked like there could be a dramatic start.

Sarr moved the ball on to Boulaye Dia whose first time shot was goalbound but deflected over by Frenkie de Jong. Shaken but not stirred the Oranje replied and with De Ligt now helping rather than hindering his team as he began the move that finished with a dangerous Gakpo cross that Steven Bergwijn stretched for but just failed to connect with.

Next up it was former Manchester United player Daley Blind, watched by Dad and Dutch assistant boss Danny, sneaking in at the far post for a chance at goal but his header from Gakpo’s cross was the wrong side of the upright. Then came the real big chance on 19 minutes. Bergwijn did a turn that brought gasps to get away from two opponents and find Steven Berghuis to pinpoint De Jong in acres of space on the far side of the goal. But with Senegal players retreating quickly, De Jong delayed his shot, instead deciding to turn inside one man, then another before the opportunity was gone as Cheikhou Kouyate whacked the ball out of play. Virgil van Dijk was hailed by his manager on the eve of the game as an ‘excellent captain’.

While he negates threats at one end of the pitch, he can instigate them at the other just as he did when he rose to meet a Gakpo corner in the 53rd minute, heading narrowly over. Frustrated with the lack of goals, Van Gaal sprung a surprise when he turned to Memphis Depay in the 53rd minute. Van Gaal had ruled him out of this game believing he had still not fully recovered from a hamstring injury that has kept him out of action since mid-September. Here he was called from the bench to rescue this stalemate.

But it would be Gakpo whose named was in lights, while Memphis did at least assist the second.